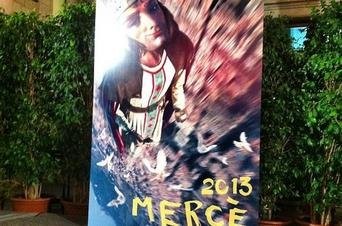 September the 24this Santa Mercè, the patron saint of Barcelona, so throughout the weekend the city turns into the stage of a great party.

September the 24this Santa Mercè, the patron saint of Barcelona, so throughout the weekend the city turns into the stage of a great party.

The Mercè fills the city each year with music, festivities and activities. During several days there are many things in which you can participate and enjoy, designed for people of all ages. For children there are many workshops, attractions and shows. For adults there are many concerts, exhibitions, projections, popular runs, plays and other types of cultural expressions.

As always, La Mercè is full of interesting proposals. On one side there are the more traditional acts that you can not miss: sardanes, Castellers (human towers), gegants, capgrossos, correfocs, etc. Definitely a world of color which for those of you who are from outside of Catalonia you can certainly not miss.

But la Mercè comes this year with news and activities that take new technologies in. The facade of the Town Hall will be the screen of a spectacular video projection of video lights which this year will pay tribute to Georges Méliès and his trip to the moon. But the main novelty is that for the first time there will be a concert with a virtual singer named Ona.
As it has already become traditional, the grand finale will be the big music and firework show in Avinguda Maria Cristina.

All information and programming on the official website of La Mercè.