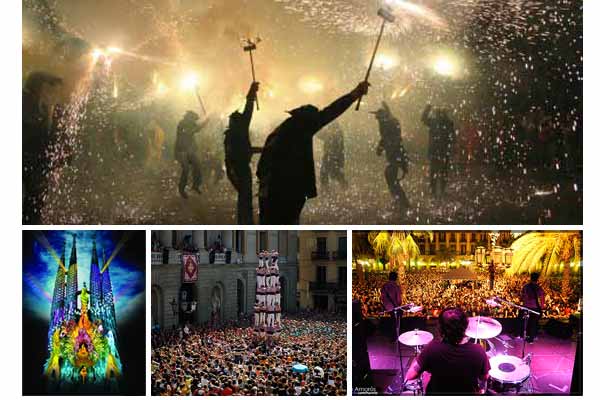 The most awaited festivities of Barcelona come with the celebration of La Mercè, the patron saint of Barcelona.

Starting on September 21 Barcelona celebrates its annual festival and  is filled with a wide variety of activities for all ages for several days. Concerts, street performers, theater, workshops, Castellers (the famous "human towers," recognized as Heritage of Humanity by UNESCO), Sardana, gegants, correfoc, outdoor cinema …

Following tradition, the Festival of La Mercè will feature parades of Gegants and Capgrossos, traditional dances and, of course, the Correfoc, one of the most spectacular celebrations consisting of a parade show through the streets of Barcelona of dragons and demons who throw flares and fireworks.

Outside the merely traditional, the Festival of La Mercè is also full of many other activities for both adults and children distributed in different spaces of Barcelona. Some of the highlights will be the multimedia show at the Sagrada Familia to be held on the first day, on the 21st, and the grand fireworks display with the Museu Nacional d'Art de Catalunya background, which will close the celebrations on the 24th.

You can check the full program on the website of La Mercè.

If you are looking for a place to stay for La Mercè festivities in Barcelona, you can do so at Hotel Paseo de Gracia, a budget hotel in the center of Barcelona, or at Hotel Actual, which is the only 3-star hotel on Paseo de Gracia.